Check out the latest from 3rd Century Solutions on the economic state of Oregon.

Renewable Energy Via Freedom, Not Force

Renewable Energy Via Freedom, Not Force

This article was published as a guest column on EarthTechling.com.

Many believe the free market and renewable energy are at odds. Renewable energy advocates proclaim fossil fuels will continue to dominate the energy landscape, even if consumers perceive them to be rife with environmental issues. This belief has driven political leaders to subsidize renewable energy development, mandate utilities to provide renewable energy options, and force citizens to purchase them. The free-market stance looks at the situation differently.

END_OF_DOCUMENT_TOKEN_TO_BE_REPLACED

Measure 76 will take a law which sunsets in 2014 and turn it into a constitutional amendment reserving in perpetuity 15% of lottery proceeds for water, parks and wildlife programs. Approved in 1998, the original measure was intended to fix a dilapidated park system and improve watersheds throughout Oregon. Today, many of the measure’s original objectives have been accomplished, raising the question of whether any government program can ever end.

END_OF_DOCUMENT_TOKEN_TO_BE_REPLACED

Cascade in the News: John Charles on KATU

In this KATU segment aired last Friday (10/15), John Charles predicts a downward spiral for TriMet if it continues to award expensive benefits to their employees.  Click here to watch the clip. 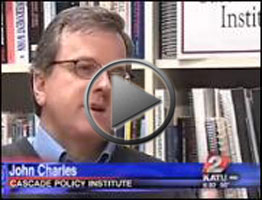 Click the play button to hear the audio commentary

Intel announced this week that it will bring almost 7,000 new jobs to Oregon by expanding in Hillsboro. That is 7,000 individuals who will be paying taxes and spending money in Oregon. This is unusually good news in this time of economic trouble and high unemployment.

But why did Intel choose Oregon when it could build anywhere? Especially when certain Oregon taxes are significantly higher than taxes in many other states. Intel has a number of special tax deals with the state of Oregon and local governments that allow it to keep a competitive edge in a world marketplace. It gets special tax exemptions on much of its property and equipment. Furthermore, most of its income is also exempt from Oregon’s corporate taxes because the company sells most of its products outside of the state. Yet, even many who a year ago claimed that Oregon’s businesses aren’t paying their “fair share” will be encouraged by today’s news. That’s because 7,000 private sector jobs will breathe fresh life into the area. END_OF_DOCUMENT_TOKEN_TO_BE_REPLACED

Measure 26-119 is being billed by TriMet as a bond measure to help improve bus service for handicapped riders and the elderly. Indeed, at the August meeting of the TriMet board, roughly a dozen handicapped individuals were brought in by the TriMet staff to testify in support of the measure. After a short discussion and virtually no due diligence, the TriMet board voted unanimously to place the measure on the November ballot.

However, a careful reading of the ballot title indicates that bond funds will not be restricted to bus improvements. TriMet management will have full discretion to spend the funds on any capital project. Moreover, the bus projects TriMet is promising to undertake with these funds will only cost $82 million at most, leaving $43 million leftover for undesignated uses.

Given that the TriMet staff announced in July that federal funding for the Milwaukie light rail project will only be 50%, rather than the hoped-for 60%, it’s clear why this ballot measure was rushed to the board for the August meeting. There is a high probability that bond revenues will be used to backfill any shortfall in local match money for both the Milwaukie light rail project and the Lake Oswego-to-Portland streetcar project.

END_OF_DOCUMENT_TOKEN_TO_BE_REPLACED

The immediate effects of the most recent recession have hit Oregon especially hard. Declining incomes, diminished job opportunities and depressed property values have stalled spending and shrunk savings. In addition to these immediate effects are the longer-term effects that are just now being projected. State government in Oregon will emerge from the recession with reduced revenues and a reduced potential for economic growth to sustain the rates of state government spending growth enacted prior to the recession. The most recent revenue forecast projects general fund revenues to be $1.27 billion lower than forecast at the end of the 2009 legislative session. Last year, Oregon Governor Kulongoski declared, “Oregon cannot continue to fund public services at the levels funded today.” Rather than make minor revisions, Governor Kulongoski argued a “reset” is necessary, charging that “we must re-think the way we deliver the services provided by state government.”

END_OF_DOCUMENT_TOKEN_TO_BE_REPLACED

Click the play button to hear the audio commentary

This month’s film opening of Waiting for “Superman” has put the spotlight on low-income parents trying to break cycles of poverty and low achievement by sending their kids to charter schools. Sadly, these children face a lottery process that makes their futures dependent on a roll of the dice.

END_OF_DOCUMENT_TOKEN_TO_BE_REPLACED

October’s nationwide opening of the new film Waiting for “Superman” is igniting new interest in the desperate desire of thousands of low-income parents to get their kids out of failing, one-size-fits-all public schools into better-performing charter schools. The five children poignantly profiled in the film face barriers to their dreams in the form of too few charter school seats and a lottery acceptance process that makes their futures dependent on a roll of the dice.

Charter schools are fast becoming a vital education option for thousands of low-income students throughout the U.S. But immediate, viable, successful alternatives to failing public schools have existed, often right in parents’ own neighborhoods, for decades – and in much of the U.S., they pre-date the American public school system itself.

END_OF_DOCUMENT_TOKEN_TO_BE_REPLACED

For those interested in the national debate on tax cuts, here’s an interesting video from the Heritage Foundation.

The movie Waiting for “Superman” is this year’s An Inconvenient Truth. Produced by the same man, it lets Americans come face-to-face with students condemned to a terrible public education unless they are lucky enough to literally win a charter school seat in a public lottery.

On its own, the movie will create devastatingly negative publicity for failing public schools. However, it is accompanied by the recent announcement that Facebook founder Mark Zuckerberg will donate $100 million to help improve the notoriously bad Newark, New Jersey public school system. Zuckerberg says he’s giving the money because he believes in Newark Mayor Cory Booker and New Jersey Governor Chris Christie.

END_OF_DOCUMENT_TOKEN_TO_BE_REPLACED

Ever wondered how much Portland government officials are compensated? TheOregonPolitico.com has just launched a new Portland salary database for their GovDoc website.

The Oregon Health Plan: A Policy Placebo
by Eric Fruits

The Oregon Health Plan has been called a “bold experiment” designed to expand health insurance to Oregon’s low-income residents. Its promoters promised the impossible: To expand health insurance coverage while simultaneously controlling costs and fostering provider participation. These promises would be met by the explicit rationing of care through a prioritized list of conditions and treatments. However, like the experimental drug that performs no better than a placebo, Oregon’s bold experiment has produced results that are not significantly different from the outcomes seen by the U.S. as a whole. In this way, the experiment has failed.

Expanding coverage. When John Kitzhaber first proposed the Oregon Health Plan in the late 1980s, he claimed that nearly 20 percent of Oregonians did not have health insurance, a claim that state agencies have echoed ever since. Unbeknownst to them, however, their data was incorrect. Revised estimates by the U.S. Census Bureau show that between 1987 and 1989, only 14.5 percent of Oregonians were uninsured, a percentage that was not much different from the U.S. as a whole. Indeed, census data show that the rate of uninsured during the life of the Oregon Health Plan has not been significantly different from the U.S. as a whole. In the end, one cannot confidently conclude that the Oregon Health Plan had any significant and sustained impact on reducing the number of uninsured as a share of Oregon’s population.