T2020 is the transportation measure that Metro wants—not Portland residents

Is it possible to spend billions of dollars on transportation to make congestion worse? According to Metro, the answer is “yes.”

More than 75% of residents in the Portland tri-county region commute to work by car. Therefore, it should come as no surprise that a similar percentage of voters surveyed by Metro consider traffic congestion a serious problem (73%) and say that improving roads, bridges, and highways to ease traffic should be a regional goal (78%). 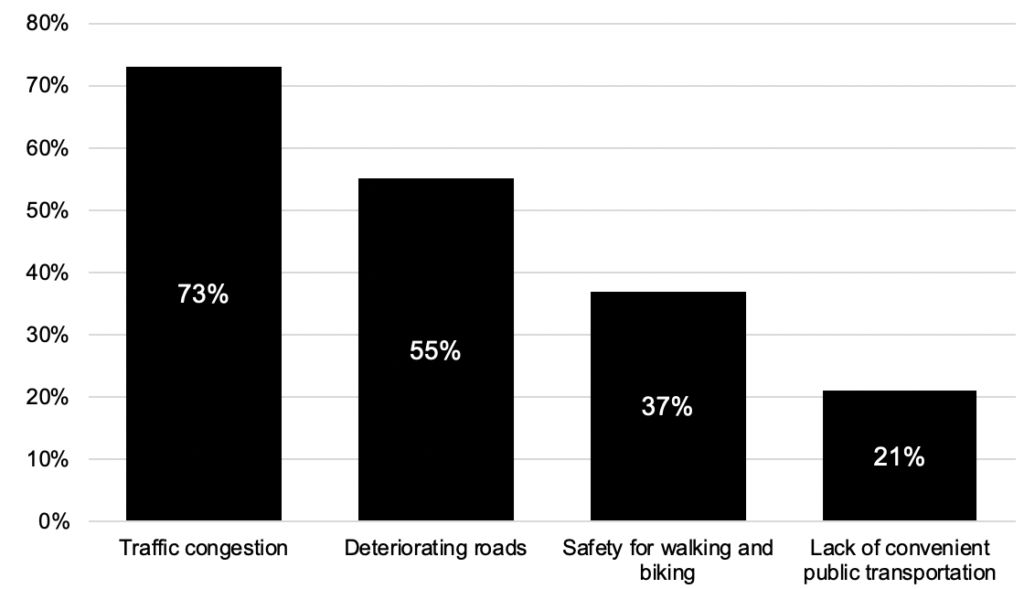 Share of respondents who answered each issue is an “extremely” or “very serious” problem.

Next year, Metro wants to raise at least $3 billion in taxes for its transportation package (informally known as “T2020”). That $3 billion is just for what Metro calls its “Tier 1” projects; it still has a long list of “Tier 2” projects that could significantly increase the price. To pay for all that, Metro is considering bonds that would increase property taxes, an additional vehicle registration fee of up to $59, an income tax, or possibly a sales tax. Conservatively, Metro’s transportation package would cost the average household an additional $530 a year in taxes and fees and would be the largest proposed tax increase in Metro’s history.

But, Metro’s T2020 tax package is not the proposal residents in the region want. Close to $2 billion from the plan have been earmarked for transit. Of that amount, nearly $1 billion would go toward a light rail line to Bridgeport Village. Another $50 million would be spent on planning for a MAX light rail tunnel under the Willamette River—planning that most survey respondents did not support. Millions more will be spent devising potential MAX light rail expansions along Powell Blvd to I-205 and 99E from the Orange line’s last stop in Milwaukie to Oregon City.

In contrast, when voters were surveyed regarding the goals for additional transportation funding, more than twice as many people indicated that widening roads and highways to address bottlenecks (31%) was their first choice, compared with only 13% of respondents who preferred providing more frequent and faster bus and MAX service. Widening roads was by far the most popular choice, beating out retrofitting bridges to be earthquake resilient and improving pedestrian safety on streets.

Finally, when asked about specific types of projects that could be funded by a transportation ballot measure, repairing potholes had the highest percentage of support (86%), while upgrading MAX to run underground at a cost of $5 billion dollars was the only potential project mentioned to have support from less than half of respondents (only 44%).

Portland residents were clear about what they want: better roads and less congestion on roadways. They were equally clear about not supporting MAX upgrades.

Instead of crafting a measure that reflects what people want, Metro has chosen to allocate the majority of funds in their 2020 transportation measure to areas that received the lowest amount of support, such as public transportation and biking/walking infrastructure improvements. It is clear these are projects that Metro staff, not voters, want for the region.

Based on respondents’ answers, officials should consider adding auxiliary lanes on freeways and major arterials to address congestion in bottlenecks. For example, a new auxiliary lane on I-5 southbound from OR 217 to I-205 brought congestion levels down from five hours a day to only one; and an auxiliary lane added to 217 between 99W and I-5 S improved congestion from four hours to zero. Adding auxiliary lanes decreases the number of merges that occur at a given section. This in turn would lead to fewer vehicle emissions, as cars idling in congestion produce more emissions than driving in free-flowing traffic. Also, merging onto a freeway is a major cause of accidents, so decreasing the number of merges also improves safety.

Metro staff seem to forget their job is to serve the public. They are attempting to force their own transportation agenda on the region instead of providing the improvements residents say are most important. Portland metro residents should stand up to this bullying by voting “no” on Metro’s transportation bond measure next year. We need improved transportation, not more low-use government pet projects.

Rachel Dawson is a Policy Analyst at Cascade Policy Institute, Oregon’s free market public policy research organization. A version of this article was published by Pamplin Media Group on November 27, 2019.