TriMet unveiled five new battery-electric buses (BEBs) in April 2019, the sides of which all donned images of windmills and sweeping gusts of wind. The BEBs each cost around $1 million, nearly twice as much as a traditional diesel bus. And these buses are just the beginning: The TriMet board voted last year to replace the entire fleet with battery-electric buses for $1.18 billion by 2040, a $500 million premium over a diesel fleet.

TriMet has been hailed an environmental hero for “riding the winds of change.” TriMet Spokesperson Roberta Altstadt claimed that TriMet was the first in the United States to “operate an electric bus on 100% renewable energy.” Without further research, it would be easy to think that TriMet’s new buses ran on clean wind energy. And that is exactly what TriMet is hoping you would think. But you would be wrong.

If the buses don’t run on 100% wind power, how is TriMet able to get away with saying they do?

TriMet spends $228.75 per month on what are known as renewable energy certificates (RECs) from PGE. RECs are a tradable commodity sold by renewable energy facilities (such as wind farms) to the wholesale market, that purport to represent the “environmental amenities” of certain renewable energy projects. By purchasing the RECs, TriMet has bought the legal right to claim it is using renewable energy; however, the agency has not purchased any energy itself.

This would be like my paying someone else to exercise at the gym for me, and then telling my family and friends I go to the gym. The person I pay reaps both financial and physical benefits while I merely get to pretend I have them.

Supporters of RECs claim the certificates offset fossil fuels and pay for the generation of new renewable energy. However, these claims are not entirely accurate. According to Daniel Press, a Professor of Environmental Studies at UC Santa Cruz, “RECs do little to reduce emissions in the real world because they have become too cheap to shift energy markets or incentivize businesses to build new turbines.” The income generated from RECs does not come close to the millions needed to construct more wind turbines, which means that RECs themselves don’t offset fossil fuels.

Despite its claims, it would be impossible for TriMet to run on 100% wind power unless it disconnected from the regional mixed grid and hooked up to its own personal wind farm. Even then, TriMet would be forced to rely on other backup power sources due to the volatility of wind generation.

While a wind turbine may be available to produce energy around 90% of the time, the average wind farm in the United States in 2018 had a capacity factor of only 37.4%. The capacity factor refers to the amount of energy produced in a year as a fraction of the farm’s maximum capacity. Wind farms produce electricity when winds reach about nine miles per hour and stop at roughly 55 mph to prevent equipment damage. If the wind isn’t blowing (or isn’t blowing strongly enough), little to no power can be generated.

This poses problems, as the electrical grid requires constant equilibrium or blackouts will result—power supply must meet energy demand. Every megawatt of wind power has to be backed up by an equal amount of traditional, “non-green” sources like coal and natural gas to account for times when wind energy isn’t generated. This would be like keeping a car constantly running at home in case the one you’re driving on the road fails.

Instead of a wind farm, TriMet receives its electricity from Portland General Electric, the same mixed grid your home is likely powered by. In 2020, this mixed grid will be made up of 37% natural gas, 28% coal, 18% hydro, 15% renewables, and 2% purchased power (power purchased on the wholesale market). Since wind only makes up a portion of renewables used by PGE, less than 15% of the electricity used by the “wind” buses is powered by wind. A greater percentage of the electricity used by TriMet’s BEBs comes from coal plants than wind farms. 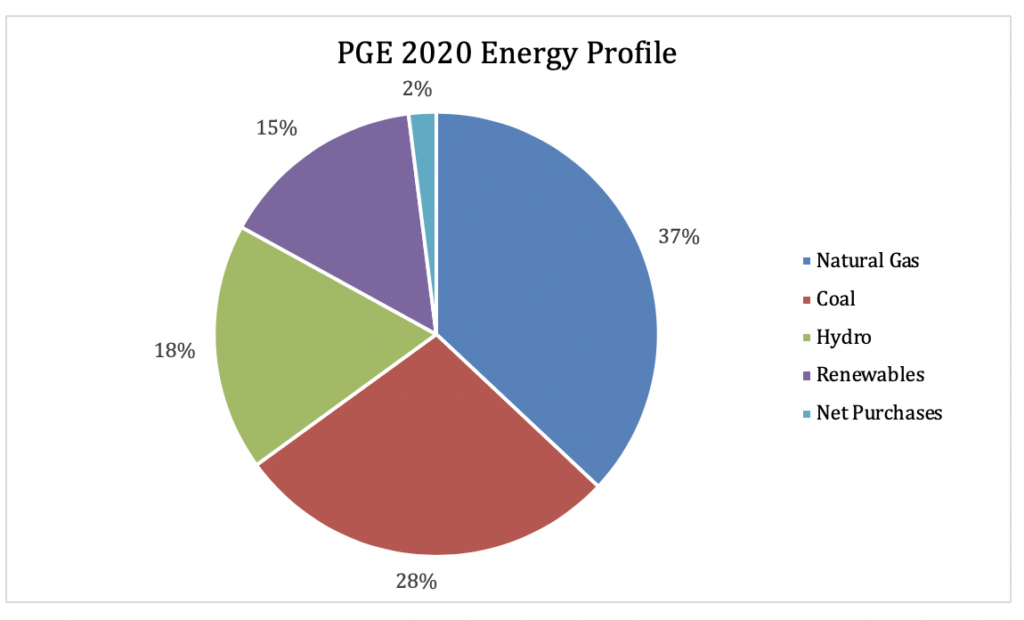 If TriMet were honest with its riders, it would replace the windmills on the sides of the new buses with coal, natural gas, and hydroelectric power plants. In the name of accuracy, TriMet could place a windmill in the corner, demonstrating the small percentage of power generated by wind farms.

So instead of riding the “winds of change,” keep in mind that you’re just riding a really expensive bus.