This bill is entirely unnecessary and could impose significant costs on Oregonians while providing no environmental benefit.

1. Oregon already has a low carbon footprint and is continuing to reduce emissions without a costly carbon tax.

Oregon is among six states in the nation credited for having the lowest carbon emissions. Oregon is tied for second on the lowest energy-related emissions, which is around half the national average. 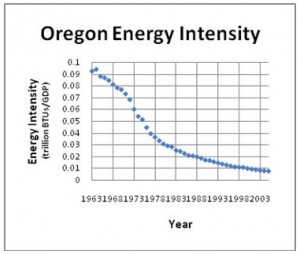 In transportation and residential emissions, Oregon has one of the lowest emissions per capita, far lower than the national average.

From 1963 to 2005, the energy intensity of the Oregon economy (the amount of energy consumed per unit of GDP) declined by 91%. This is a fantastic achievement; and we continue to make strides towards reducing energy consumption, which ultimately leads to fewer emissions per unit of GDP.

Oregon already has a renewable portfolio standard (Senate Bill 838), which mandates utilities to use less carbon-intensive forms of energy; and the state already has a carbon dioxide standard (HB 3283) on baseload natural gas plants, non-baseload plants using any type of fossil fuel, and non-generating facilities that emit CO2.

2. Because Oregon plays such a minor role in greenhouse gas emissions in the nation and the world, any reductions made from implementing a carbon tax would not have any discernable influence on global temperatures.

Oregon only contributes 0.7% of all greenhouse gas emissions in the United States.

If Oregon reduced its emissions to zero and continued this into the future (well beyond the scope of what a carbon tax may reduce), our reductions would be completely replaced by foreign growth in 16 days. The growth in China alone would replace our reductions in as little as 25 days. Thus any strategy to merely reduce (not eliminate) emissions would be replaced by foreign growth in just a few days.

3. Global temperatures have been declining for the past few years despite increases in atmospheric carbon dioxide concentrations 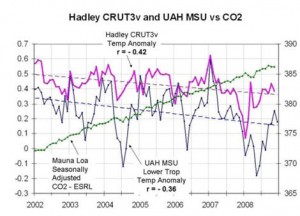 The graph to the left shows the latest plot from 2002 to 2009 of global temperatures from Satellite (UAH MSU lower troposphere) (blue) and land and ocean variance adjusted surface (Hadley CRU T3v) (pink) plotted with CO2 concentrations from Mauna Loa (green).

It is obvious that there are more factors that affect global temperatures than just the small amount of human emitted greenhouse gases. Thus, a policy geared towards reducing human emitted GHGs in Oregon is a low-leverage policy at best.