Recently, I had a long conversation with an owner of a bakery near Medford, Oregon. He told me of the problems his company faced due to the disincentives inherent in Oregon’s unemployment insurance system. Two years ago, in the middle of the recession, this entrepreneur offered a job to a man who promptly responded that he would not be able to start work for another month. Why? Because his unemployment benefits did not run out until then.

This example is one of the more troubling stories I’ve heard about the problems created by unemployment insurance. Most are less dramatic. A friend of mine only applied for highly competitive jobs she knew she had little chance of getting. She really preferred to stay on benefits. She was expecting her child to be born soon, and it didn’t make sense to start a new job, particularly since her husband was gainfully employed.

Peer reviewed research shows that people receiving unemployment benefits commonly take longer to find a job. Unemployed workers who receive benefits take more than twice the time to find a job than those who do not. The instances of recipients finding a job increase strikingly just before UI benefits are exhausted (see graph below). That doesn’t mean individuals who use unemployment benefits are dishonest, lazy, or bad. It does mean that incentives and logic play roles in their job searches. A new job is not only work, but it is full of risks and uncertainty. In some cases, a new job may pay less than unemployment benefits.

Unemployment benefits come with certain requirements precisely because of these incentive issues. Workers must actively search for work and accept appropriate full-time employment. However, requirements are frequently ignored or misunderstood. A U.S. Department of Labor report showed overpayments in unemployment benefits across the nation amount to almost $19 billion in waste. Beating the national average of 11%, Oregon overpaid an estimated $392 million over the last three years―about 12.2% of all state unemployment benefits paid during that period, according to the Labor Department. About one third of overpayments involved workers receiving benefits when ineligible because they were not available for work or because they failed their work search requirements.

The Labor Department’s report only examined the improper payments within state programs, which usually last up to 26 weeks. These figures do not include federal unemployment benefit extensions that currently allow many workers to claim up to 99 weeks (almost two years) of benefits.

So what’s the solution?

Chile’s unemployment insurance savings accounts have cut back on the disincentives that slow the job search for many who receive unemployment benefits. Chile’s workers and employers pay a portion of wages into Unemployment Insurance Savings Accounts. Each worker has his or her own account. When a worker becomes unemployed for any reason (even if it is voluntary), he or she may draw 30-50% of the previous wage for up to five months from the personal unemployment account. Workers who are laid off with small account balances receive help from a more traditional unemployment insurance safety net. At the end of their careers, workers may keep any balance in their unemployment accounts for use in retirement.

Chile’s experience demonstrates that these accounts offer an improved safety net that also improves some of the disincentives within the U.S. system. The personal accounts system motivates workers to return to work faster so they can have more money upon retirement. Chile’s system also broadens the pool of eligible recipients, since workers own their personal accounts. That means workers who cannot accept full-time employment (like a working mother or student) and workers who quit their jobs for personal or professional reasons (who are not covered under our system) would have some limited coverage under Chile’s system. This system may not solve all overpayment problems, but it would prevent a significant portion of overpayments, since ultimately workers are first paid from their own accounts.

One recent state-specific study (commissioned by Cascade Policy Institute) by economists Stéphane Pallage and Christian Zimmerman showed that switching to a system similar to Chile’s unemployment accounts system would benefit 97% of Oregonians. Even those who are most likely to be unemployed or most likely to have empty personal accounts would benefit from the switch. According to the economic model used, such a system would decrease the unemployment component of payroll taxes while improving outcomes for nearly everyone.

Oregon’s unemployment insurance system is rife with waste because it promotes longer unemployment and has inordinately high overpayment rates. Unemployment accounts would be a huge step in the right direction, improving incentives and rewarding hard work and personal responsibility while still maintaining the safety net that most Americans have grown accustomed to. 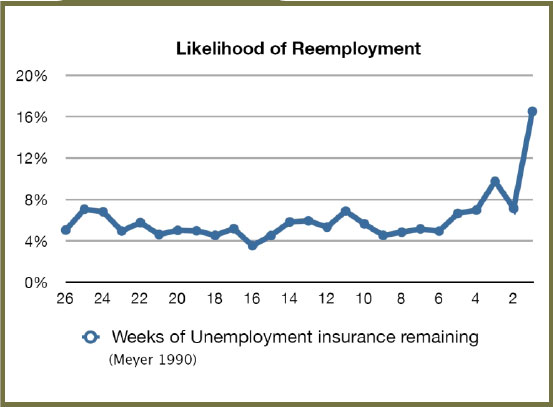