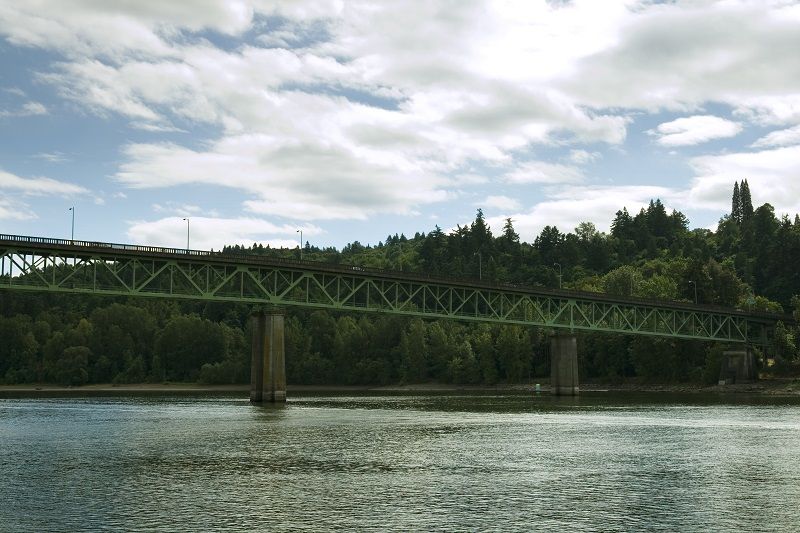 Portland has an international reputation for successfully integrating land-use and transportation planning. The primary goals of such planning are to limit the physical size of the city and reduce the daily use of private motor vehicles by encouraging alternative modes of travel.

Many transportation policies have been developed in support of these goals. One of the most visible has been the policy of slowing vehicle speeds through “traffic calming” and “road diets.” Advocates claim that reducing road capacity for motor vehicles has only minor effects on travel time. They also assert that future demand for road space can be mitigated through mode-shifting from single-occupant driving to walking, biking and transit.

In the late 1990s the Sellwood Bridge and its eastside connector, Tacoma Street, provided a perfect opportunity to test both the concept of integrated planning as well as the strategy of implementing a road diet. The original Sellwood Bridge opened in 1925, and over the next 60 years it became the most heavily traveled two-lane bridge in the state. By the mid-1980s the Bridge was badly in need of either major remediation or replacement.

Multnomah County, which owned and operated it, imposed vehicle weight limits in 1985 and again in 2004. After the second reduction, all heavy vehicles (including transit buses) were prohibited.

With traffic levels continuing to rise, it was clear that Multnomah County needed to either build a wider replacement bridge or a two-lane replacement plus another bridge nearby to the south. Local planners, however, believed the Portland region to be overly reliant on the private automobile and decided to place a moratorium on any new Willamette River bridge capacity. They assumed that if the region simply stopped building bridges, they could persuade people to switch from driving to some other mode.

Soon thereafter, the City of Portland undertook a study of Tacoma Street in the Sellwood-Moreland neighborhood, with the goal of making it more pedestrian-friendly. The result of that process was a recommendation to downsize Tacoma from a four-lane collector to a two-lane “Main Street,” even though Tacoma was already a two-lane road except for four hours each weekday – 7-9 a.m. and 4-6 p.m. – when street parking was disallowed so that traffic flowing to and from the bridge could move faster. Striped crosswalks were also recommended in three locations between SE 6th and 13th, to allow pedestrians to safely cross mid-block.

Tacoma Street was put on a “road diet” in 2002, in which two travel lanes in each direction became one travel lane each way along with a center turn lane.  These changes meant the Sellwood Bridge replacement would also inevitably be limited to two traffic lanes. While the new bridge was designed to be more than twice as wide as the original, more than half the through-lane capacity was allocated to non-motorized uses. The County made this decision even though 98% of all peak-hour passenger-trips on the old bridge had taken place in motorized vehicles.

The new Sellwood Bridge opened for travel in February 2016. The north side cycling/walking facilities were open, but the south side bikeway and shared-use sidewalk did not open until 2017.

Now that the bridge has been fully operational for more than two years, it’s possible to measure actual travel patterns and compare them with the forecasted results. It turns out that the transportation planners were wrong in their prediction of how future travel needs would be met.

Traffic congestion is worse than before. Cycling and walking levels have not gone up as predicted, and transit service is far below the levels promised in the planning documents. Moreover, peak-hour vehicle throughput on the bridge has been permanently reduced due to new traffic signals at either end of the bridge and lowered speed limits.

Since bridge “supply” was reduced but motorized travel “demand” went up with population growth, motorists have increasingly resorted to cutting through side streets north and south of Tacoma in order to gain access to the bridge. In fact, the Tacoma Street downsizing made this practice easier by creating a middle turn lane that creates shelter for motorists trying to enter the traffic queue from side streets. This has degraded the quality of life for nearby residents.

Although the new Sellwood Bridge was marketed as a cutting-edge example of the Portland commitment to “multi-modalism,” the bridge itself is not even a multi-modal facility. Heavy trucks are prohibited, and there is no bus service most of the time. Average daily travel is actually more reliant on the private automobile than it was in 1993.

This paper examines the rationale for putting the Sellwood Bridge/Tacoma Street corridor on a road diet and compares actual travel data with pre-construction forecasts. It offers a cautionary note for city leaders who are planning for growth by shrinking important arterials such as Naito Parkway, Foster Road, and NE Broadway.

John A. Charles, Jr. is President and CEO of Cascade Policy Institute, a position he has held since 2004. He received a BA degree with honors from University of Pittsburgh and an MPA degree from Portland State University. He has been writing about transportation policy for more than 30 years. The focus of his research is utilizing field studies to determine how the built environment influences urban travel behavior. He has co-authored case studies of transit-oriented developments in the Portland region related to the South Waterfront district, Hillsboro’s Orenco Station, and Steele Park in Washington County. His most recent paper is entitled, Why Cities and Counties Should Consider Leaving TriMet.