Chair Burdick and members of the Committee, my name is Steve Buckstein. I’m Senior Policy Analyst and founder of Cascade Policy Institute, a non-partisan, non-profit public policy research organization based in Portland. Our mission is to promote policies that enhance individual liberty, personal responsibility and economic opportunity in Oregon.

As a member of Governor Kulongoski’s Task Force on Comprehensive Revenue Restructuring, I must express reservations about Senate Joint Resolution 26 which seeks to revise the Oregon Constitution in a number of significant ways.

I was appointed to the Task Force to represent taxpayers and believe I’m still doing so when I analyze Resolutions like this one.

First of all, taxpayers have very few ways to control the growth of government in this state. The Kicker law, flawed as it may be, is one of those ways, and I wouldn’t want to see it weakened unless something better can take its place.

I understand and applaud your effort here to get a better handle on the growth of government spending. If this Resolution sought to modify, or even replace, the Kicker with a comprehensive population-plus-inflation limit on budget growth, I would be quite interested.

But as I read the Resolution, it would reduce the Kicker’s benefit to personal taxpayers and end the benefit entirely to corporate taxpayers, while only imposing a spending limitation until a new Rainy Day Fund hits a specified size.

Second, the Resolution assumes that the Kicker law has prevented the state from building a substantial Rainy Day Fund, when in reality there is no prohibition against lawmakers spending less than the revenue forecast now, and saving the balance for a rainy day. I know you may think it’s politically difficult, but it is legal for you to do so.

Rather than delve into the details of the Resolution, I’d like to give you a visual representation of what a population-plus-inflation limit could do all by itself to control government spending.

The chart below is from Cascade’s recent budget report, Facing Reality*. It maps state General Fund expenditure and revenue forecasts through the 2015-17 biennium, highlighting the early years of what Governor Kulongowski’s Reset Cabinet warned would be a decade of deficits.

Then the chart shows how a population-plus-inflation spending limit could lead instead to a decade of surpluses. We started with the measure on the ballot in 2006, Measure 48, which was rejected by voters. If it had passed, as you can see on the chart, the 2011-13 budget would be in balance, and future biennia would see surpluses, available for a rainy day fund and tax reductions. Both results would be seen very positively by taxpayers and would stimulate business activity and job growth in the state. You can’t retroactively impose Measure 48, but you can propose that a similar measure start now.

So, in closing, I encourage this committee to change SJR 26 into a more comprehensive spending limitation that would be easier for voters to understand and would be more likely to achieve your goals.

Thank you, and I’d be happy to answer any questions. 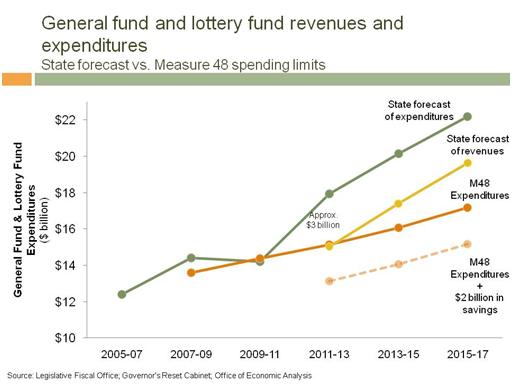