The opening words of HR 3200, the initial solution to the health care “crisis” in the United States, read: “A Bill to provide affordable, quality health care for all Americans and reduce the growth in health care spending, and for other purposes.” I haven’t yet heard President Obama or Congressional leaders comment on those “other purposes.” However, let us be completely honest here. The only words in that opening statement that have real meaning are those last four words.

The most recent Senate version, the “Baucus Plan,” is not about providing affordable, quality health care for all Americans. If it was, the evidence of the past 44 years would be enough to dissuade even the most ardent supporter of government-subsidized and -controlled health care from increasing government control over Americans’ lives by creating another health care entitlement program. After all, it is government manipulation and control of the free market that has caused unsustainable cost increases in every social program the government has undertaken.

When Medicare was passed in 1965, it was advertised as “insurance” to prevent retirees from becoming destitute due to medical costs. Initially, retirees were told they would be able to keep their private medical insurance if they were satisfied with it. Does this sound familiar?

However, shortly after the federal government instituted Medicare and Medicaid, retirees were no longer able to purchase private medical insurance unless Medicare was their primary insurance. Immediately upon Medicare’s passage, the federal government controlled 30% of the health care industry. It controls 60% of medical care today. In addition, projections for the cost of Medicare were, as is generally the case with government programs, overly optimistic. In 1970, government officials assured the American people that Medicare would cost approximately $7 billion by the year 1990, yet it reached $69 billion.

Americans were promised that Medicare costs would be sustained by the payroll taxes of American workers. However, this has never been the case. Medicare has had to draw from general funds since its inception, and that draw has increased substantially over the years, as can be seen by reviewing the graph below. 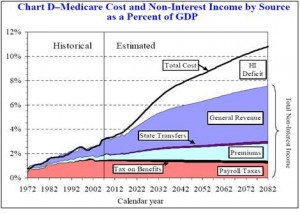 Medicare will be bankrupt by 2018, yet no one in the current administration or in the Congressional leadership is talking about how this prototypical government health care program is a complete failure. Albert Einstein said that insanity is “doing the same things over and over again expecting different results.” If he was correct there is a lot of insanity afoot.

The myth of the 47 million uninsured has been the banner under which Congressional leaders have proceeded with this current health care plan. The number of chronically uninsured United States citizens was really between 8 and 13 million. The Fraser Institute reported that the percentage of people who were “effectively uninsured” was 6% in Canada and 7.9% in the United States, despite Canada’s universal health care. The cost of health care in Canada has been rising at a significantly higher rate than in the United States. Yet, in his comments on health care, President Obama refuses to use actual Canadian statistics or to address deficiencies in socialized medical care systems.

No, it is not possible that socialized health care programs have as their purpose the provision of lower cost, higher quality health care and cost containment. Government-controlled health care is all about “the other purposes.” If Congress really wanted to lower costs and improve access, it could pass some simple reforms such as letting Americans buy health insurance across state lines, equalizing the tax treatment of employer-purchased and individually purchased health insurance, and making Health Savings Accounts more easily accessible. Instead, proponents of government-funded health care are ignoring simple free market solutions to health care reform in favor of increasing government intrusion into and control of one of the most personal and important aspects of our lives-our medical decisions and care.