How much do we spend to educate students in Oregon? It depends on what kind of spending you include. On May 31, The Oregonian cited a U.S. Census Bureau report stating that Oregon spent $9,805 on average in 2008-09 school year, 7% below the national average for per pupil education spending. That figure excluded certain spending and is well below the Oregon Department of Education (ODE) and national teachers union (NEA) figures for that same year: $10,029 and $10,129 respectively. Add the year’s debt service expenditures reported by the ODE (which presumably go toward improving kids’ education), and spending per enrolled pupil jumps to around $11,200 per student. This total figure climbs even higher to around $12,600 if you measure per pupil expenditures by actual average attendance rather than the October 1 student enrollment. 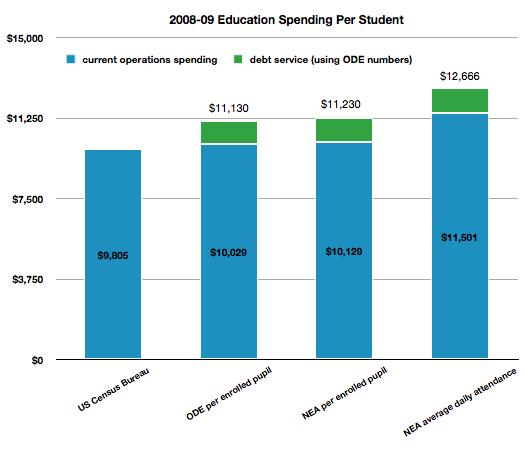 The National Education Association (NEA), the nation’s biggest union, ranks Oregon around the national average for spending (less than 2% under the average spending per enrolled pupil, but above average for spending for average daily attendance), despite our lower than average cost of living. Typical for the U.S., Oregon has significantly increased per pupil spending, from around $7,000 in 1981-1982 (after adjusting for inflation to 2010 dollars), to more than$11,000 in the 2009-2010 school year. 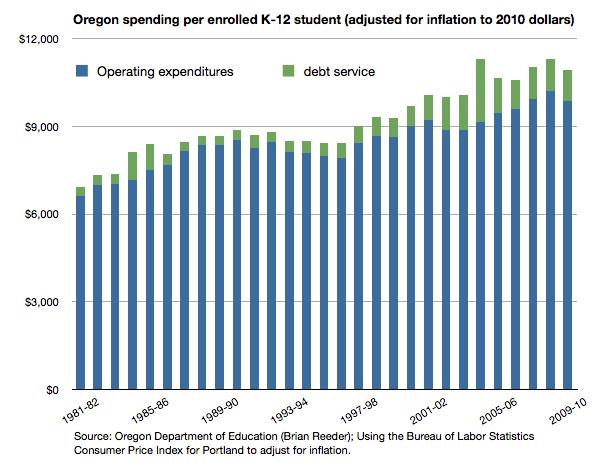 Yet, focusing on how much Oregon spends per student begs the question as to how much spending is enough. Nationwide, spending has more than doubled since 1970, but improved outcomes have not followed. While fourth and eighth graders are doing slightly better on the nation’s most stable educational measurement―the National Assessment of Educational Progress (NAEP)―it appears that any early gains are lost by the time they reach the finish line: 17-year-old students have not improved since the U.S. Department of Education first started measuring their math and reading performance with the NAEP in the 1970s.

Likewise, international evidence confirms that spending is a poor predictor of educational outcomes. While the U.S. is among the top for per pupil spending, we place in the middle of the pack of developed nations. Decade after decade, our leaders promise better outcomes with “better oversight” and “increased accountability.” But the accountability they speak of does little to empower teachers or administrators to harness their own unique talents and passions, nor does it empower parents and students to find the educational program that would best help them thrive. Bottom-up, market-oriented reforms already have proven successful in places like Florida, New York City and Milwaukee.

Rather than hyping the same empty promises that require better “oversight” by bureaucrats, many states are now catching on and creating more educational opportunities with public charter schools (choice schools), open enrollment policies, opportunity scholarships and education savings accounts. Groups like Oregon’s Stand For Children now recognize that increased funding is not a silver bullet; rather, smarter spending is necessary. Movies like Waiting for “Superman” and The Cartel highlight true success stories around the nation. Perhaps Oregon, too, will join the new wave of effective education reform.