Air Quality and Economic Innovation: “You Didn’t Do That”

Home » Economic Opportunity » Air Quality and Economic Innovation: “You Didn’t Do That”

Asked by reporters how he felt after a victory over the Cleveland Cavaliers, former Chicago Bulls center Stacey King told reporters, “I’ll always remember this as the night that Michael Jordan and I combined for 70 points.” This is the comment that came to mind when President Obama told an audience recently, “If you built a business – you didn’t build that. Somebody else made that happen.” The President went on to say, “If you were successful, somebody along the line gave you some help.”

Certainly, Stacey King legitimately could tell reporters that without him, the two players would not have scored 70, even though King scored only one point and Michael Jordan contributed the other 69. Indeed, the President legitimately can say that government services like road construction, national defense, and the like contribute to a climate that allows economic growth and innovation. It would be hard to imagine, however, Stacey King telling Michael Jordan, “You didn’t do that. Somebody else made that happen.”

The economy isn’t the only area where politicians attempt to grab more credit than is deserved. Air quality is another good example.

For many on the environmental left, the story of air quality begins in 1972, the year the Clean Air Act (CAA) took effect. There are a couple reasons for this. First, prior to 1972, air quality data is intermittent. As part of the monitoring included in the CAA, the government began collecting data on a consistent basis. So, history appears to begin in 1972 because records before that are incomplete.

Second, it marks the beginning of a government program promoted by politicians and activists. They have a strong interest in demonstrating that the policy for which they advocated is working. How many times have you heard a politician say, “I advocated for this, but it didn’t work the way I wanted. I was wrong”? I’ll give you a minute to think.

In fact, the Clean Air Act has contributed to air quality. Air quality today is dramatically better than it was forty years ago, despite a significant increase in population, wealth, and miles traveled. That story, however, ignores the role the private sector played in making this happen, long before the CAA took effect. 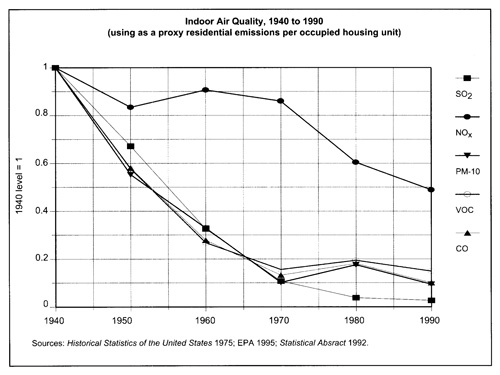 The following graph shows the trend in indoor air quality from 1940 through 1990. As you will notice, the vast majority of the reduction in traditional air pollutants had occurred by the time the CAA was enacted in 1970 and implemented in 1972. Trends in outdoor pollution are similar. A major reason for this is that improvements in energy efficiency meant fewer pollutants per unit of energy. Unburned coal dust emitted from a smokestack was not only air pollution, it was lost energy. Burning coal or gas more completely and efficiently meant less air pollution and increased wealth.

Ignoring the value of private sector innovation ignores a key part of the story. Claiming the Clean Air Act was entirely, or even mostly, responsible for improved air quality is not accurate.

Pretending the Clean Air Act had no role to play is equally false. The most dramatic example is lead. Between 1970 and 2005, nationwide lead emissions decreased by 99 percent, largely due to the switch to unleaded gasoline. Everyone has their role to play; and belittling others to build your own role up is not only incorrect, it is childish.

Success has many fathers, especially when there are politicians around whose profession is taking credit for others’ success. This impulse, however, makes for bad policy and bad basketball. A team that demeans Michael Jordan’s contribution because “somebody else made that happen” is as likely to have as much success as a government that tells innovators like Steve Jobs or Jeff Bezos they owe their success to government regulation.

Todd Myers is the environmental director at Washington Policy Center. He has more than a decade of experience in environmental policy and is the author of the book Eco-Fads: How the Rise of Trendy Environmentalism Is Harming the Environment. He is a guest contributor for Cascade Policy Institute, Oregon’s free market public policy research center.