Report Makes the Case for Cities and Counties to Leave TriMet

The study shows that TriMet’s ongoing financial crisis is not just a temporary problem, but a permanent one caused by a failed business model. The agency has one of the most expensive union contracts in America, and the managerial obsession with rail transit is cannibalizing bus service. These problems go back decades, and it’s now too late to fix them.

Due to these factors, TriMet will face annual service reductions beginning fiscal year 2017. Those cuts will slowly destroy the agency. State law has long allowed jurisdictions to leave TriMet, and six communities already have: Molalla, Wilsonville, Sandy, Canby, Damascus, and Boring. Four of those cities created their own transit districts. Based on these experiences, the Cascade study recommends that more jurisdictions consider opting out and create their own transit districts.

Cascade Policy Institute’s report shows that the four cities operating their own public transit systems have lower labor costs, lower payroll tax rates, no long-term debt, virtually no unfunded liabilities for retirees, and better service than they previously had under TriMet.

Services under TriMet have continually declined since 2005, yet the TriMet payroll tax is at an all-time high of 0.72 percent.

“With major TriMet service cuts projected for FY 17 and every year thereafter, jurisdictions still paying the TriMet payroll tax should begin investigating options for leaving the district,” says the report.

According to Cascade President John A. Charles, Jr., “When TriMet was formed in 1969, the expectation among supporters was that creating a single public monopoly transit provider would create economies of scale. Unfortunately, what we really created were ‘diseconomies of scale.’ TriMet’s business model is now permanently dysfunctional, and the evidence from opt-out cities is that ‘smaller is better.’ Cities such as Sherwood, Tualatin, Lake Oswego, and West Linn should not wait for the inevitable collapse of TriMet; they should actively begin assessing the prospects for creating their own transit agencies, either as stand-alone districts or in partnership with nearby communities.” 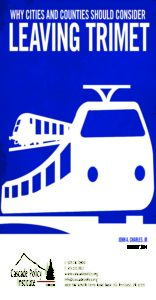